The Telegraph today covers the story of Graham Mills who has decided to crowdfund to raise the fees for his appeal to the Supreme Court. His JustGiving online fundraising campaign is called ‘divorced men: doomed to life as a cash machine.’

Following his original financial agreement at the time of his divorce in 2002, Mr Mills returned his case to court in 2014 for the termination of maintenance payments. This provoked a cross-application by his former wife to have her maintenance payments increased.  Her case was based on need, namely that as a result of having made some poor financial decisions since the original split of the marital finances, she could not only not afford to be financially independent from Mr Mills, but she actually needed increased financial support.

To the 'widespread astonishment' of many, given the prevailing mood being shown by the courts towards financial self-sufficiency of former spouses at this point post-divorce, she succeeded, and her maintenance was increased. That decision was then upheld by the Court of Appeal.

Says Mills: “Judges are completely out of touch with modern society. They don’t treat women as being strong and capable of independence. A decision like this says that ex husbands have to look after women for the rest of their lives – as if women are damsels in distress and need to be protected.

As I write, on day 11 of a 60 day campaign, funds raised stand at £3167. Its certainly an innovative way to raise funds and I wish Mr Mills well in reaching his target of £50,000. I take my hat off to him for taking on the 'broken system' as he is. As a divorce lawyer I'm frequently asked by both former wives and husbands for advice on the prospects of increasing, or terminating, earlier maintenance awards. The current state of the law really does make it difficult to advise them with any certainty and I've no doubt I will be one of a great many in my profession who will welcome increased clarity on the issue.

Graham Mills is on a mission. Spurred on by the bitter experience of his own divorce battle, the 50 year-old surveyor has become a one-man army - determined to go all the way to the Supreme Court to change Britain’s divorce laws.  With an unflinching honesty that has garnered him thousands of supporters, Mills says that our courts are “outmoded and dangerous” - turning men into “cash machines for life” and setting feminism back 20 years by making women “dependent on men”.  Forget about me; this is for every person who’s been shafted in the divorce court.  Today, after a three-month cooling off period, he has decided to speak out again, as despite – or perhaps because of – all he has been through, he is ready to go back to court. 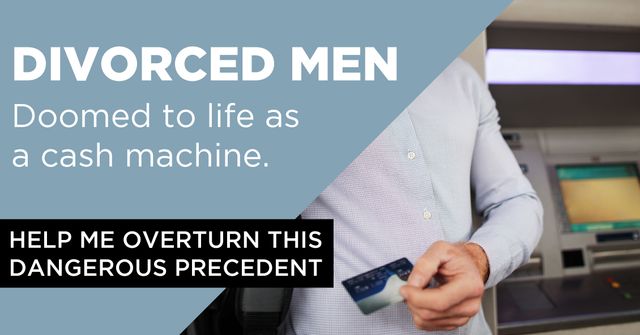 'I'm fighting my ex-wife for every person who's been shafted by Britain's divorce courts' https://t.co/N248WXcYD2

NEW BY ME: 'I'm fighting my ex-wife for every person who's been shafted by divorce courts' https://t.co/qE6ReFupQD via @TelegraphMen

'I'm fighting my ex-wife for every person who's been shafted by Britain's divorce courts' https://t.co/9DkLBsbWBr pic.twitter.com/1euhSHUDN6