Sharland and Gohil - apparently the latest landmark decision of the Supreme Court. Phrases such as "open the floodgates", "landmark decision", "incredibly significant ruling" banded about by various different news stories. I was naturally excited about a new landmark decision within the family courts, as any family solicitor would be. But, to my disappointment, upon further research, it seemed that nothing had actually changed. And this was confirmed by a very illuminating talk given by 1KBW last night.

Despite the sensational reports in the news, virtually nothing has changed. Well virtually nothing for most of us, apart from these two divorced women who have probably spent 100s of thousands of pounds in legal fees, on potentially nothing more than a point of principle.

First, it is not a new concept that if someone lies within the family courts, any order made on that basis can be set aside. This has been the case for decades.

Second, an ex husband or wife has to actually find out about assets that have been lied about. If the lie has been about £50,000 in a bank account it is unlikely that the lie will ever be discovered.

Third, the actual circumstances in these two cases are in my opinion will rarely occur:-

In the case of Sharland, the lie related to a possible IPO of a company in which the husband had a significant share holding. Most cases of non disclosure relate to say a hidden bank account, where the value of the hidden asset can be defined at the time. This is very different from Sharland, where a lot of the argument surrounded the fact that the lie was in relation to a 'potential' IPO and therefore the value was unclear.

What I was shocked to hear last night from 1KBW was that these women may not actually receive any more money as a result of the Supreme Court's decision. In Sharland, the husband's company has not been doing as well as expected, so Mrs Sharland may actually have to give some money to her husband. In Gohil, the husband's assets are the subject of confiscation proceedings, so they may all be seized and returned to the victims of the crime.

Alison Sharland, who accepted £10m in her divorce, and Varsha Gohil, who got £270,000, say the men hid the extent of their wealth when the deals were made. Solicitors for Ms Sharland's ex-husband Charles said the ruling could "open the floodgates" to thousands of cases. The court indicated that both claims would return to the High Court. BBC legal correspondent Clive Coleman said it was an "incredibly significant ruling" that meant a division of the parties' financial assets had to be based on a "valid agreement". "If one of the parties is dishonest, if they are misleading about what their assets are, then this is a very clear signal that the other party can go back to court, can have the agreement set aside and can have the whole thing considered again," he said. 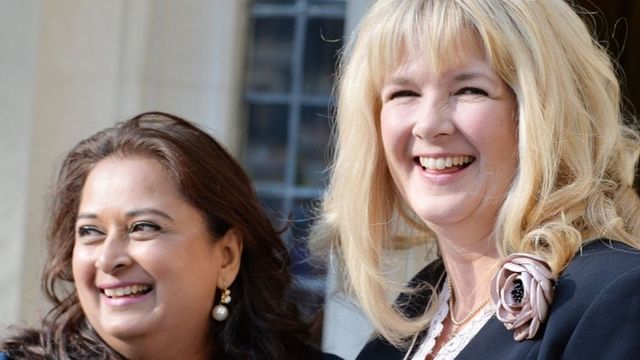 Two UK divorcees who say they were misled by their ex-husbands win their Supreme Court fight for more money http://t.co/XW7QjBIC10

Never forget: half of absent fathers pay nothing towards raising their children | Polly Toynbee http://t.co/f3I2WU2buc